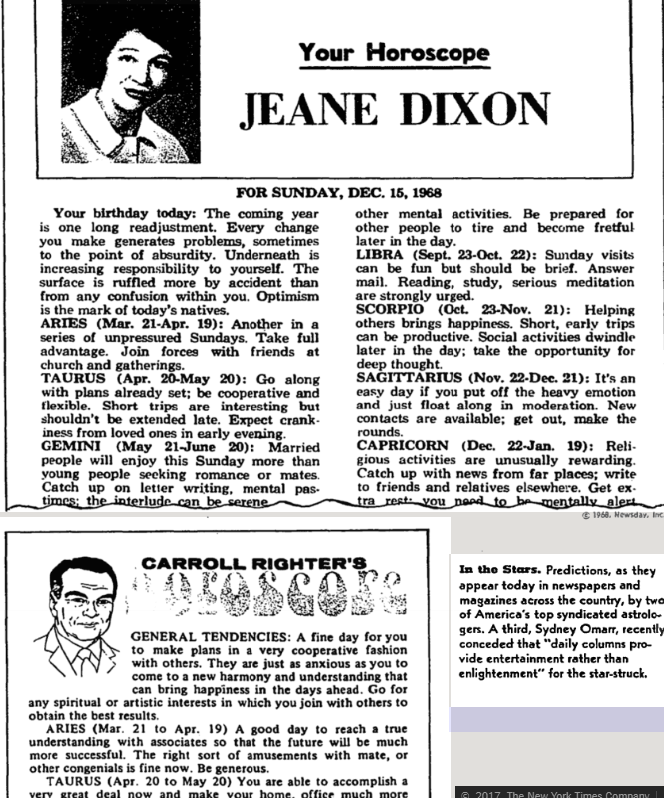 At the time this article was written for the Times, Carroll Righter aka Pappy, and Jeanne Dixon had the most popular astrology columns in the country.  Carroll Righter as his obit below reports, was the astrologer to the “Stars,”  having cornered that market as early as 1938.  He was nicknamed Pappy as so many of the LA Lights looked to him for guidance.

Jeane made headlines because in 1956 she said that a “blue eyed man would die in the office” of President. Alas, she also called the 1960 election for Richard Milhous Nixon, but it was the assassination call that made her fab. 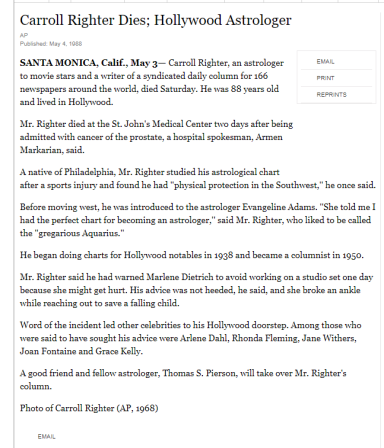 Jeane Dixon,  born Jeane L. Pinckert in Medford, Wisconsin., was the daughter of a lumber businessman and  grew up in California. Admirers said she had a talent for foreseeing the future, which she ascribed to God as she was devout Roman Catholic.  When she was 8 years old, the story goes, her mother took her to see a gypsy soothsayer who said Jeanne had a gift for prophesying. The child’s mother thereafter encouraged her in those efforts.

In 1939, Jeane  married James L. Dixon, who went on to be president of James L. Dixon & Company Realtors in Washington D.C.   She helped him in the business by predicting individual’s futures and future events & in the process acquired a local reputation for accuracy.  She was First Lady Nancy Reagan’s astrologer. 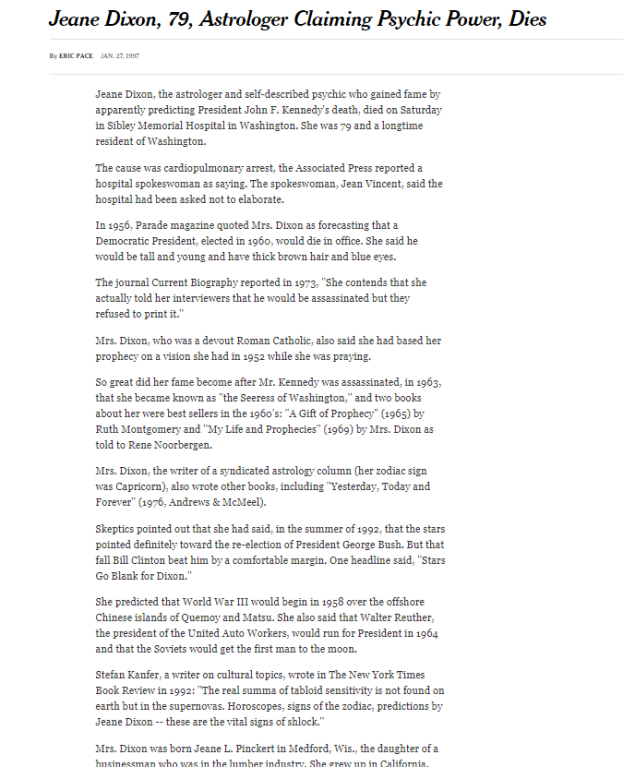 Back to our story and Omarr.

With all this “filler” it’s hard to note that Omarr’s comment in the Times is a small side-bar where the Times notes that “a third, Sydney Omarr (of Philadelphia) commented that the daily horoscope printed in newspapers, though never in the Times, were more for “entertainment than enlightenment.”  (In case you missed it, scroll up and look to the right of Righter’s box.)

Chances are that the Times ran the story as a holiday filler, something light and entertaining to fill in the pages as the news was probably at a lull during the Christmas season.  I chose 5:15 am as when the paper starts to rolls off the presses and get delivered for the 6 am bridge and tunnel crowd, as colloquially the boroughs and Jersey are called.

The 5:15 publish time  gives the paper a 29 Scorpio Rising  with Neptune right on the cusp.  The Sun  & Mercury are both in Sagittarius and the Sun is on the Second House cusp.    That makes sense as Mercury in Sagittarius  shows how the Times was a resource for higher quality reading (Sagittarius rules higher education) and purportedly was written at a tenth grade level while  most dailies like the New York Daily News are written at grammar school (second grade) level.

Neptune in the Twelfth House also supports that it was for “mature” audiences and on the cusp that it was “required” Sunday reading for most of the New York City metro area.

The Chart, a  bowl with a bit of lip on it,  has several planets in the Tenth House, so it can scoop up information from the Western side of the map, or literally shows how the Times uses the experience of its staff  and distills “all the news that’s fit to print”  via the Saturn at the Fifth House (the symbol is a Magic Carpet ) for its readers.

Another conjunction is in the Tenth and Eleventh houses between Mars 22  (in Libra has the symbol of a child giving a drink to a bird at the public fountain) and the Moon 24 (in Libra symbol of the third wing on the left side of a butterfly)  demonstrating how much the Times’s prestige was based in its being a precise and truthful source.

Saturn found on the edge of the bowl that does the scooping, is opposite that Mars-Moon conjunction in the Fourth House, a heavy burden at the nadir and suggesting that  it is only a matter of time before things change, because Father Time (Kronos in Greek, Saturn in Latin) never stays still.

Jupiter and Uranus are conjunct in the Tenth House but Jupiter is a bit hamstrung in Capricorn’s home and Uranus cries for revolution and change.  Trine Venus (the Old Grey Lady  — the Times nickname) there is a sense that the “times are a-changing,” as Bob Dylan, the bard of the Sixties sang… but probably more than anyone yet knew.