Hallene Hill was a Hollywood Actress.  There is little on Amazon-owned Imdb.com about her, but I did notice that she did not start her acting career until she was near 50. As her midheaven is in Capricorn that makes sense, she was a late bloomer.  She has a lot of energetic planets in her fifth house of Creativity and acting, which is what caught my eye in Boris Karloff ‘s Thriller, Cousin Tundifer.   The woman was literally all over the stage, remarkable because she is about 85 at the time

Click here to watch, it’s a very good episode, but to be honest, I think Karloff’s Thriller was a good show, period. I believe I have watched them all — thanks to the wonderful uploaders at youtube.com as i had never heard of it previously.

The header picture is from the Andy Griffith Show where she shows up in the closing scene. 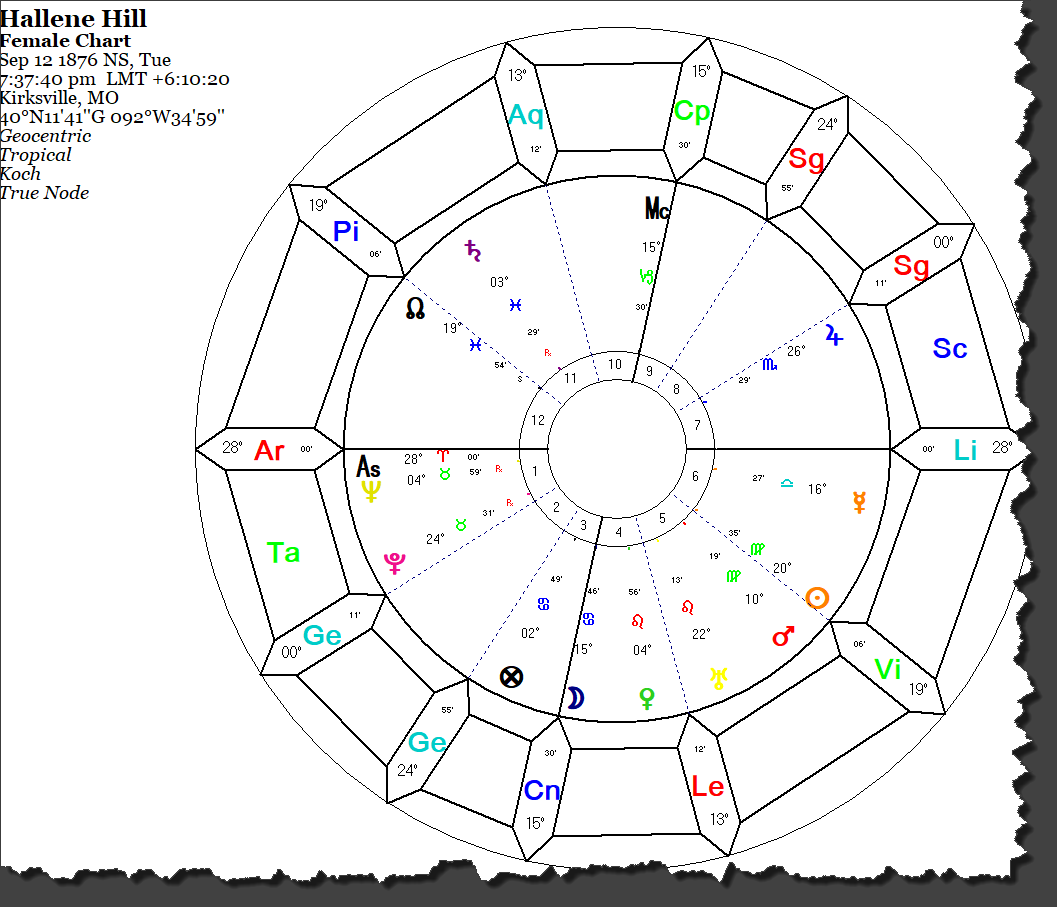 Her ascendant is 28.10 in Aries, making her a veritable spitfire.

Her temperament type is unusual — a wheelbarrow, the handles of which are Saturn at 03.33 Pisces, just miss being exalted in the house of Aquarius,and Jupiter at 26.29 in Scorpio, also the Line of Personality.  These handles suggest her “hidden strength” which in Ms. Hills case are perhaps a husband and lots of supportive friends who encouraged her to make the leap.  Wheelbarrows are a subtype of the Splay type.

Her Line of Vitality is Sextile, the Sun is at 20.11 Virgo and the Moon two houses away at 15.46 Virgo a favourable aspect, telling us she is her best in everyday affairs that again, strike her fancy.  The Moon is in his own house of Cancer and so is exalted, giving her an artistic and rather dreamy bent in life.  Photography, film, music and poetry and things ethereal would capture her interest and as the Moon is sextile Neptune conjunct the Ascendant at 04.58 Taurus she would not be one who makes sandcastles on the beach or snowmen, but would rather “capture that Kodak moment” and persevere it.  This setup as it works right into her Ascendant would also have made Ms. Hill, quite vain.

Chances are she was married and had at least two children, girl and boy.  Her Part of Fortune is in the third house, close to her brothers and sisters, so she was close to her family,  and full of interesting trivia to share.

From the various searches I did, she was in lots of Western-type films as a minor character, including a Kubrick piece.  Her last appearances were on the Jack Benny show, in her standard “Grandma” character.  Seems she made quite a good outing in the “character actor,” those people who a specialized in playing eccentric or unusual people rather than leading roles.of vintage Hollywood. Click here for Ms Hill  in an Andy Griffith Show.Our featured image is from there.  You will find her at about 21.00 in.  Previous to her, is another character actress, Ellen Corby, known as Grandmother in the Walton Family tv show.

With Aldebaran in her second house, she was sparing in speech, and tough on her friends, who appreciated her honesty because she did it without maliciousness but the intent to teach and help them better themselves (Rigel conjunct).

Perhaps that is why they were so supportive of her; she had always been with them and with Piscis Australis in the twelfth house opposite her Sun, they encouraged him and help her get bit parts in Hollywood.

Another possibility with her six house was that she was a voice teacher (the Star Spica in the sixth).  It is hard to be sure when you know so little, perhaps someone out there can help and fill in some details.

Here is hallene-hill‘s chart with Solar Fire’s Cosmodynes.  I’ve been reading Doris Doane Chase’s book on them and Solar Fire’s does not incorporate her version.  I have found them interesting but I doubt I will be adopting SF’s anytime in the near future.